When we first began planning our New England visit, sometime late last year, I had the idea to put together a special reunion show, one at which we could reconnect with our dearest friends and musician buddies from days gone past. My initial thought was to throw together a band of players from my New England nightclub days, have a few guests sit in, and that a few of our old friends might turn up too. To my delight, all that happened, and then some. 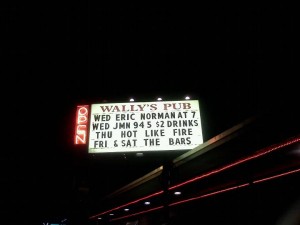 Sometime around February I began putting this all together. The first thing I had to do was pick a place. Hmmm, early August in New England? What better place to do this sort of thing than Hampton Beach! And why not pick a venue in which I used to perform regularly back in my New England heyday, Wally’s Pub, which turned out turned to be the perfect spot. I would need a core band of players, so I contacted drummer, John Medeiros; and bassist, Keith Foley; both whom I once played with in my old band, Electric Blue. I wanted to have another guitar player involved as well, so I called up my friend, and former guitar student, Charles Cormier, who was a junior in high school when I left New England. Charles now plays with the seacoast jam band “Superfrog” from which I also recruited percussionist, Adams Viciguerra.

Once I had the place and the players, it was time to invite some special guests, and I began putting out some feelers months in advance. Putting together a reunion show from afar takes a lot of work, and I spent a lot of time e-mailing, talking on the phone, and sending mp3’s across cyberspace. It was all well worth the effort. On a warm Sunday afternoon a few days before the show, we had one rehearsal with the core band and, thanks to everyone doing their homework, things came together pretty quickly.

So Wednesday finally arrived, and the band guys arrived around 5:00 PM to set up and sound check. Our five piece ensemble was joined by, Jeff Bissonnette, a sound engineer that I knew from the “Jet City era”. We got everything dialed in and then our friends and guests began to trickle in. I hired a local videographer, Mike Maleszyk, to document the evening and he showed up about an hour before the show with one of his cohorts and three video cameras. A lot of friends that Kelly and I hadn’t seen in ages started arriving and I did my best to make some rounds before showtime. Some of these friends I hadn’t even seen since high school, some 25 years ago. There were so many people I wanted to talk to but so little time. 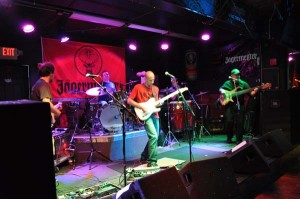 Eight o’clock came around and it was time to get down and boogie. “The Eric Normand and Friends Band” felt good right off the bat and I was excited about the vibe we were putting forth. Despite the fact that I hadn’t played with any of these guys in a decade, and most of the players had never played together before, the group had a real synergy and maturity, almost as if we had been playing together for years. We played an hour-long set of my favorite tunes, blues-rock music born of another era. Songs by Freddy King, Delbert McClinton, Jimi Hendrix, and the Allman Brothers, got a good dance floor going by mid-set. A couple of high points came during our rendition of the classic “Sweet Melissa” and an extended version of “Little Wing”, the former turning out to be a particularly proud moment for me when Charles took a beautiful and emotive solo. This all crescendoed with the set’s climax of “Black Magic Woman”, complete with full blown Santana-style percussion and an extended outro jam that nobody wanted to end.

We took a break and I made a few rounds, trying to catch up with as many of my friends and musician buddies as I could. I didn’t get to talk to everybody (not for lack of trying) and I wish I could have had more time. It was time to kick off the second half of the night, and this began with a couple of songs with the core band plus friend and former Electric Blue member, Tom Martin sitting in on bass. Next would come a “Jupiter’s Ghost” reunion, and this was comprised of Doug Hinton on drums, Mark Gagnon on bass, Keith Bowen on vocals, and me on guitar. We played two songs in what felt like a literal time machine, a packed dance floor from the get-go. Keith stepped down and Brandon LePere joined us on vocals for the next onslaught. Once again it was “Sherman set the way-back machine”, and when I looked across the stage it felt like 1995 again. Once upon a time a lifetime ago, four guys had a little rock band called “Shockwave”, and we played, and played, and played. We went through a lot together, and many great memories and feelings came rushing back during this part of the night. 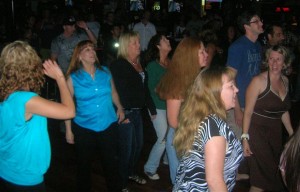 The dance floor was packed! photo by Catherine Fraser-Dery

Next it was time for one last reunion grouping and the crowd heard the announcement “Will Stan Jackson and George Bisson please come to the stage”. Yes, that’s right a partial “Jet City” reunion was about to unfold. A little “Alice in Chains” followed by some “Bad Company” kept the dance floor hopping. Sadly, the night was drawing to a close, and I had the core band return for one final number, “Whipping Post”.

Have you ever experienced a moment in time that was so full of positive energy and wonderment that you hoped it would never end? An experience so pure and magical that you wish you could just live inside of that moment for eternity? For me, and maybe a few others on this particular night, this was one such moment. Life is whizzing by, and the perception of time seems to be changing, literally speeding up exponentially. This fact has recently clarified some things for me. Friends and family are of the best things in life, and to me, friends are family. The times we spend together make us who we are, and on this trip, reconnecting with the friends of our past was a powerful experience. So many people made this special night happen. People drove from as far away as Brattleboro, Vermont and Portland, Maine; Stan Jackson drove all the way up from Cape Cod to participate in this night. Thanks everybody for making it all come together!

The night did have to end, but the memories we made will last a lifetime. And besides, I don’t see any reason we can’t make this an annual event. Meanwhile, Kelly and I have adopted a new theme song, one from which I would like to appropriately quote for the end of this writing –

“Meanwhile I, ain’t wastin’ time no more,
Cause time goes by like hurricanes, and much faster things,
Don’t forget the pouring rain.”

I would like to send out a special thanks to Mike Maleszyk, Catherine Fraser-Dery, Athena Erickson, and Curt Comeau for the use of these photos.