Train Wreck at Tootsies and a New Beginning

During the summer of 2002 I was aggressively exploring the live music scene of Nashville. Upon the recommendation of my friend, D, I was regularly making the rounds at clubs on Broadway, Printers Alley, and other spots around the city to better understand the scene, and to begin building the relationships I would need to succeed here. For the most part I was in kind of a watch and learn mode, often finding a table with my wife at the back of these clubs and just listening to the performers, sometimes even writing down the names of unfamiliar songs on napkins to learn later. Most of my musical background is rooted in rock, blues and jazz, so the repertoire played by most of these artists and bands, being mostly country, was largely foreign to me. Not to mention the art of country guitar playing, partly based on a technique called “chicken pickin”, was something I had yet to conquer.

I had already successfully sat in on a few occasions, carefully choosing situations that would allow me to showcase on songs and styles that were familiar to me, but for the most part I had avoided sitting in with bands that played mainly country. D had conveyed to me the importance of slowly building a great reputation – “Good news travels slow, but if you fart on stage they will immediately hear about it all over town.” So I was slowly and carefully building my reputation. But this cautious approach prevented me from sitting in on many occasions, fearful that I would get in over my head. D respected the fact that I was being cautious, but he also knew that I was beginning to become pigeonholed as a rock player as I never sat in on country tunes. So maybe that was part of the reason he invited me to a 6 to 10 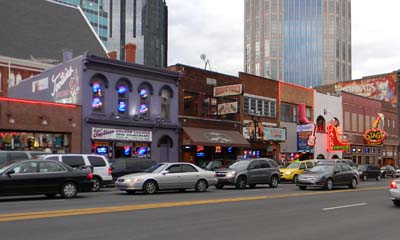 shift he was playing on a Saturday night in the front room of Tootsies.

My wife, Kelly, and I arrived downtown around seven o’clock and found a parking spot. The summer air was hot and thick and people were out in abundance. We walked into Tootsies, which was packed to the gills, and found a spot to stand near the bar a few feet from the tiny stage. D spotted us and gave me a nod. He was playing with a stripped down Broadway unit of drums, bass, and guitar, fronted by an otherwise typical looking country singer sporting a cowboy hat, cowboy boots, denim shirt, and Wrangler jeans. The band was cranking out country standards in rapid succession, the tempos were fast, the music was loud, and the crowd was partying heavily. After an hour or so D looked over at me and said “Do you want to play a couple?” Feeling that I needed to rise to this occasion, I nodded yes and walked over to the stage.

As I hopped up on to the overcrowded stage he handed me his guitar and said “Just ask the bass player if you don’t know the changes, he’ll help you through.” I had just barely strapped on the guitar when the singer shouted out “OK boys, Rocky Top in G”, a country standard I 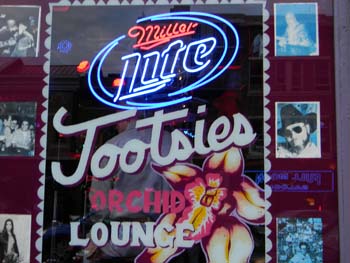 had heard on several occasions but had yet to play. It just so happened that the singer was playing an acoustic and, as the first verse is just acoustic and vocals, this gave me time to figure out the chord progression. So when the whole band came in after the first chorus, I was right there with them, sort of. While I did manage to improvise, or fumble, my way through the first solo without any glaring problems, apparently I was a little heavy handed on the rhythm of the next verse, probably due to years of playing in rock bands combined with almost no experience playing country. D motioned from his spot at the bar to hush my volume a little and I attempted to do so. I managed to get all the way to the end of the main part of the song, hanging on by a thread, before it began to get ugly.

For those of you unfamiliar with this Broadway classic, the main body of the song is played with a half-time feel, the song modulates up a whole step, and then the song kicks into double time for a long-winded fiddle solo outro. So, being the only soloist in this situation, it was my job to mimic the fiddle solo, and I managed to do so quite poorly. While I had been practicing my chicken pickin’ technique daily for a couple of months by this point, this was probably my first practical application. I quickly learned that practicing this style with a metronome or CD at home, and improvising a would-be fiddle solo at warp 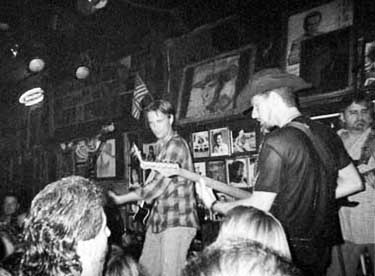 speed with a band in a nightclub are two different things. No matter what I heard in my head, my fingers just wouldn’t do it. I hacked, chopped, and butchered my way through two long choruses that seemed to drag on for eternity.

The song ended and the crowd of tourists cheered, completely oblivious to my train wreck. But I am certain that the other players on stage did hear every single ugly note I played. D certainly did as he quickly came to my rescue, snatching the guitar from my hands before I could do any more damage. “That one got away from you a little bit.” he kindly said as I left the stage. Feeling less than excited about hanging around after this awkward moment, we left after a couple more songs.

The next day D called me and we spoke about my debacle. “I think you should stay away from Broadway for a little while, at least until you get a little more familiar with the songs and the style. The guys I was playing with last night are cool and know you’re still learning, so there’s no harm done there. But you definitely don’t want to want to do anything like that again.”

I had already been playing guitar for over 20 years and could play rock and blues as good as most. But country music wasn’t yet in my vocabulary, and chicken pickin’ was as foreign to me as French Morocco. It was like learning how to play guitar all over again. That one train wreck made it apparent to me that I was going to have to practice for three to four hours a day for quite a while to learn this new language. So that’s just what I did. I obtained recordings of as many country standards as I could and burned mix CDs. I began dissecting the songs, writing number charts for them, learning arrangements, rhythms, solos, even bass lines. As chicken pickin’ is essential to traditional country guitar playing, I followed one piece of great advice from D “Put on a CD of old-school country and improvise solos over entire songs using the chicken pickin’ technique.” I forced myself to do this and, although I sometimes felt like throwing my guitar through the window, slowly began to see improvement. I was determined to never have another moment like my debacle on Broadway ever happen again. And while I did eventually get the hang of chicken pickin’, to this day, I still cringe every time I hear Rocky Top!